This week’s sketch is a direct progression of Sunday sketch #341. Instead of half-circles, I’ve used flying geese, and instead of larger circles in the inside of those black squares, I’ve introduced more squares. The colouring’s much the same, and there’s still a ton of movement, with lots of secondary shapes created by all those horizontal, vertical and diagonal lines. 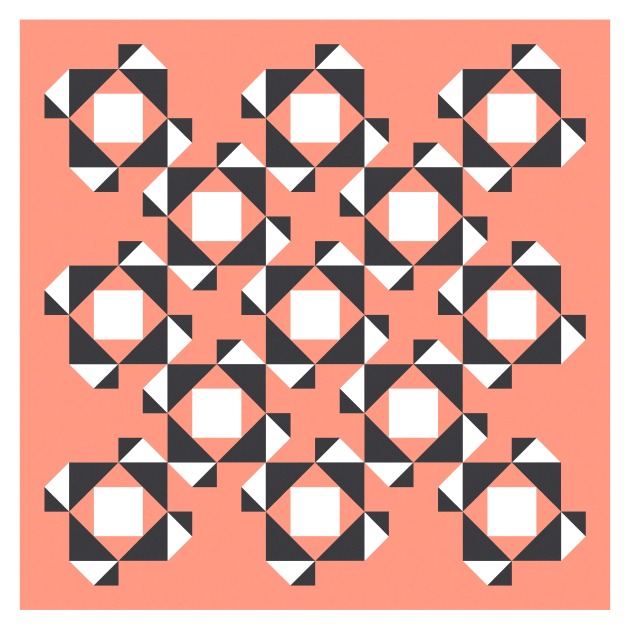 The good thing about introducing flying geese is that their angles match those already in use in the design – so the sides of the geese are parallel to other lines in the design. Same with the central white squares. That helps to keep the whole design feeling coherent and less cluttered.

Here it is in a standard layout (with the blocks not on point). 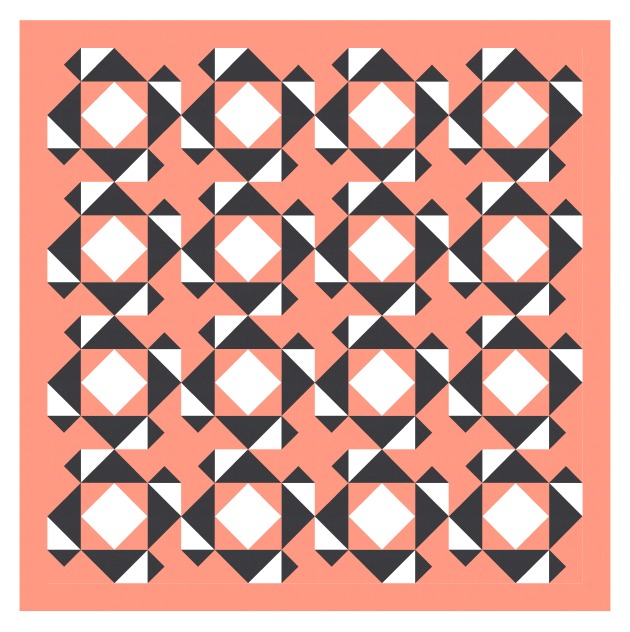 I also tried replacing the flying geese with another shape – a triangle-in-a-square unit – but… nah. I don’t think it works well at all.

I’m not entirely sure why I don’t love these variations very much… they just feel a bit too busy and chaotic for me. The triangle-in-a-square units just add too many new angles that aren’t repeated elsewhere in the design, and it all feels very pointy and sharp. No thanks. But hey, I’m happy to share them anyway, because that’s what the Sunday sketches are all about: exploring design ideas, playing with shapes, and inspiring you to do the same.

These designs could be made using squares, half-square triangles, flying geese and rectangles. The standard layout above is an 8 x 8 grid, so 64 blocks total. Although you wouldn’t have to construct blocks before constructing the whole quilt – you could just make all the individual units and then piece them together in rows or columns. All the colouring is the same in all blocks, so you could chain-piece your way through them in no time.

I don’t have too many designs up my sleeve at the moment, and when I sat down recently to draw something new, I ended up rehashing an old sketch.

This week’s design is a reworking of Sunday sketch #318, which I posted in July. I introduced some curves, which actually make the whole design simpler to construct as a quilt.

The shapes kinda remind me of Christmas crackers too: long rectangles (or cyclinders) capped by triangles at both ends.

Like the original sketch, this one illustrates the Bezold effect – an optical illusion where a colour (in this case, orange) looks slightly different depending on which colours are next to it. I didn’t know there was a name for this until Carolina Oneto mentioned it in a comment on my Instagram post for Sunday sketch #324 (obviously it’s an effect I use a fair bit!).

Anyway, this sketch could be made into a quilt using flying geese, half circles (or quarter-circles or drunkard’s paths units) and squares. I think it’d be much easier to make than the original sketch on which it’s based!

This week’s Sunday sketch is inspired by art that I saw on Twitter. I follow a few accounts that serve up wonderful art every day – images of paintings or other creations and the people behind them. My favourites are @MenschOhneMusil and @womensart1.

PL Henderson, the art historian who curates the #WOMENSART feed, posted a series of works by Ukrainian-French artist Sonia Delaunay in early October. The image of 1920s-1930s clothing designs caught my eye. Those shapes and colours!

I’m embarrassed to admit that I didn’t know much about Sonia Delaunay or her work. She combined abstract geometric shapes and bold colours in art and fashion. And she was a quilter! Well, she made at least one quilt, a process that apparently prompted her to change the direction of her art practice.

Anyway, it seems fitting that I’d be inspired by one of her designs. If you check out the image of the clothing designs on Twitter, you might spot which dress sparked this idea. In the next version, I coloured the ‘skirts’ differently from the bodices and extra quarter-square triangles. You can see that I inverted the shapes in alternating columns.

Because there are so many shapes, there are lots of other possible variations in colour placement. This next one is perhaps a bit heavy in this colourway. But sometimes it’s fun to play, just to see if any new ideas emerge.

I also tried two shades of a single colour, which also looks good, I think. This approach also makes it clearer to see secondary shapes and other apparitions emerge from the design. I feel like there are a few serious dogs (or bears?) wearing shades in this version. (Can you see what I mean, or do I sound like I’ve lost my mind?)

There are a couple of ways this design could be made into a quilt. You could create a bunch of quarter-square triangles and lay them out in columns, separated by columns made of flying geese and squares laid vertically. Or you could set the whole thing on point, and use squares and half-square triangles instead. I think it’d be pretty easy once you got started.

If you want to read more about Sonia Delaunay, check out this profile in the Guardian, published to accompany an exhibition at the Tate Modern in 2015, and a more recent article from this year, in Daily Art Magazine.