The basic shape in this week’s designs is based on the main shapes in Sunday sketches #289 and #290. I filled out those two connecting shapes, making them each a wonky hexagon. Tiling and rotating the blocks creates a bunch of new designs. I added a bit of visual interest by bisecting each hexagon on an angle, allowing me to use a different colour in each half. 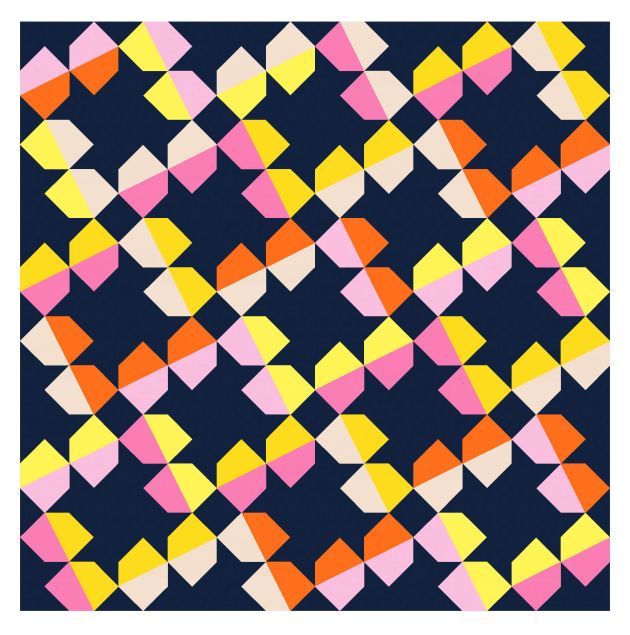 The hexagon is such an old-school quilting shape. It’s fun to inject a bit of modernity into it.

I’ve used my usual happy/warm palette with these designs, but of course you could use any palette (or prints!) you like. 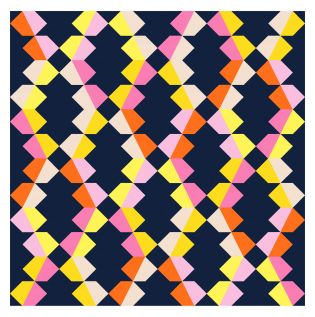 This week’s design could be made into actual quilts using half-square triangles, half-rectangle triangles, and a few rectangles. It’s block based (each of the designs shown here is a 6 x 6 layout), so you could make a bunch of blocks then piece them together.

I think these designs could work well as scrappy quilts, too. Using fabrics with different saturations on each side of the hexagons would highlight the secondary shapes created by those bisecting lines (like the diamonds in the two versions shown above).

You might notice the resemblance between this week’s designs and last week’s. 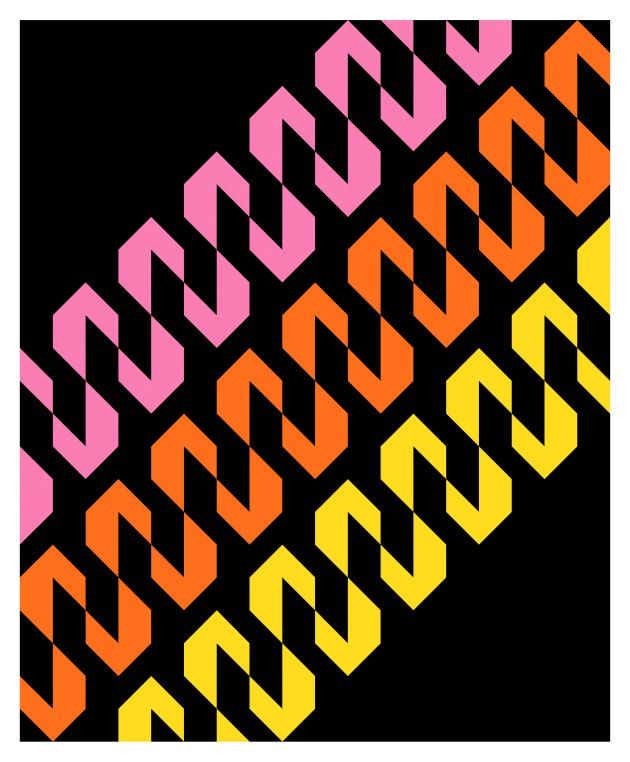 This week’s designs use the shape I showed last week but didn’t use then. Here’s a reminder…

Multiples of this shape can be connected by just their tips, once again creating ascending rows of loop-like structures. But unlike last week’s design, this week’s has only elongated diamonds as the secondary shapes. Colouring them (in white, below) helps to see them more clearly, and ties the three rows together. 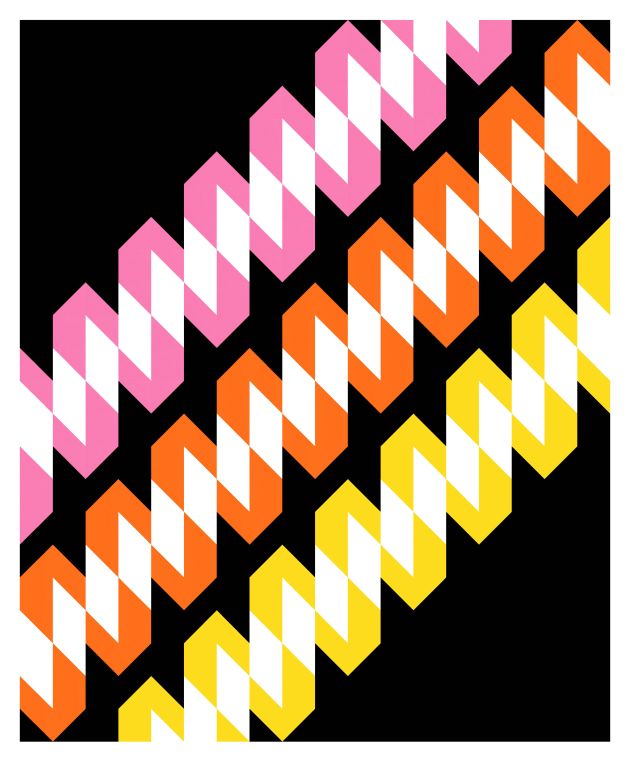 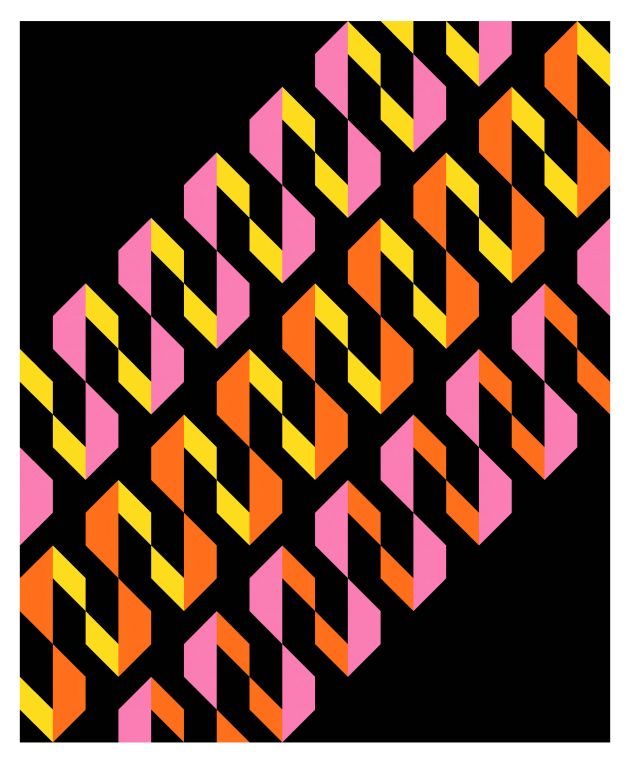 …or fill in the spaces between the shapes to create a whole new shape – in this case, crosses.

Like the designs from the past two weeks, this week’s Sunday sketch could be made into an actual quilt using half-square triangles and squares. They’re not designs that can be easily broken down into discrete blocks, so you’d be better off making a ton of HSTs and just laying them out in rows and columns, then sewing them together.

In Sunday sketch #287, I picked out a particular combination of shapes that I wanted to play with some more. Since then, I’ve spent a bit of time seeing what I could do with them. Not much, as it turns out! 🙂 Well, at least not much that I thought was worth sharing. But I did my usual iteration / modification, and ended up with a bunch of designs that I really like. Here they are! 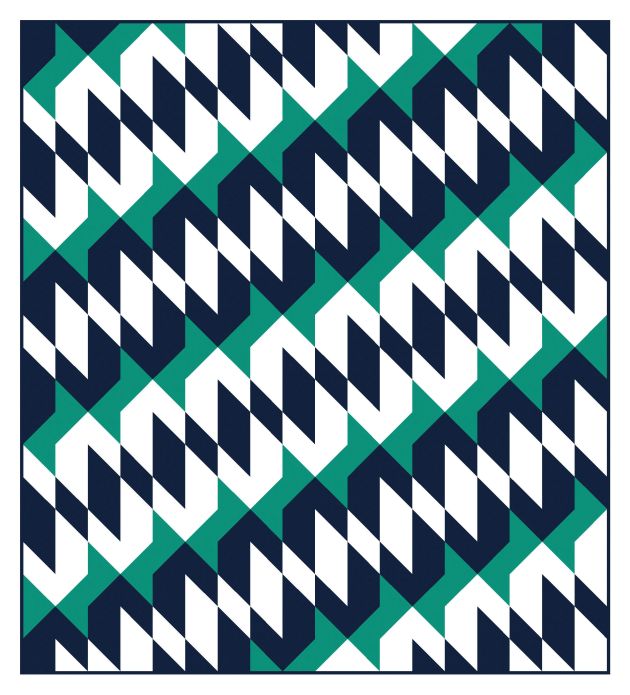 So, it might not be so obvious at first glance how this design relates to Sunday sketch #287. Below left is the shape that I picked out from that sketch; below right is the modified shape I ended up with. I added one half-square triangle to each side, which changed the angle of the connection between them (diagonal rather than horizontal).

But hang on – that’s not the shape I ended up using in this week’s design! Well, it almost is. Instead of having the two parts touching at just one point, I slid one part along a smidge so that they touch at both points, creating a closed loop. Connecting these loops in slightly inclining rows also creates a series of secondary shapes in the centre – diamonds and elongated diamonds. The loops and diamonds can then be coloured differently, depending on which element you want to emphasise. 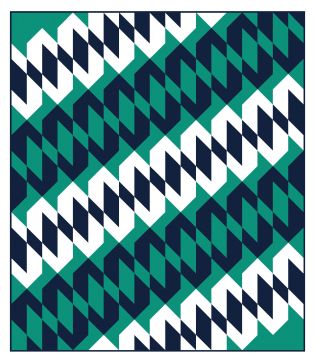 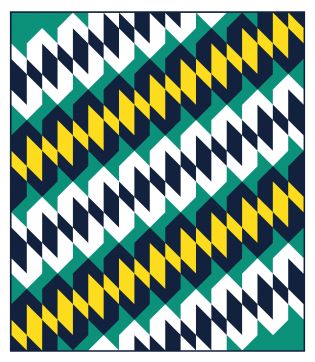 You can also take elements away to modify the design yet again. 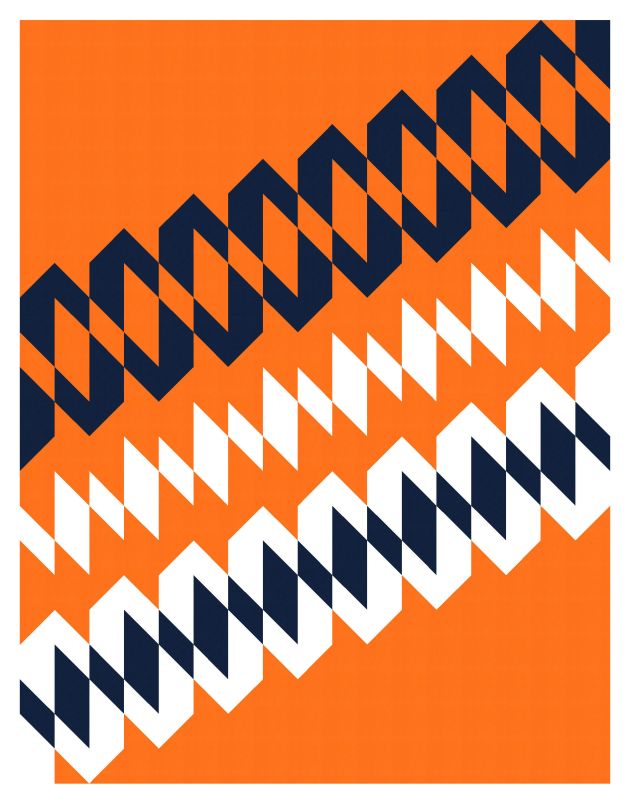 Or use colour to create different connections between certain shapes. Here, I’ve alternated the colour of the top and bottom of the loops to give the impression of a spiral or a zig-zag. I really like this version! It’s got a lot of energy, I think. Or maybe that’s just the acid yellow, haha! 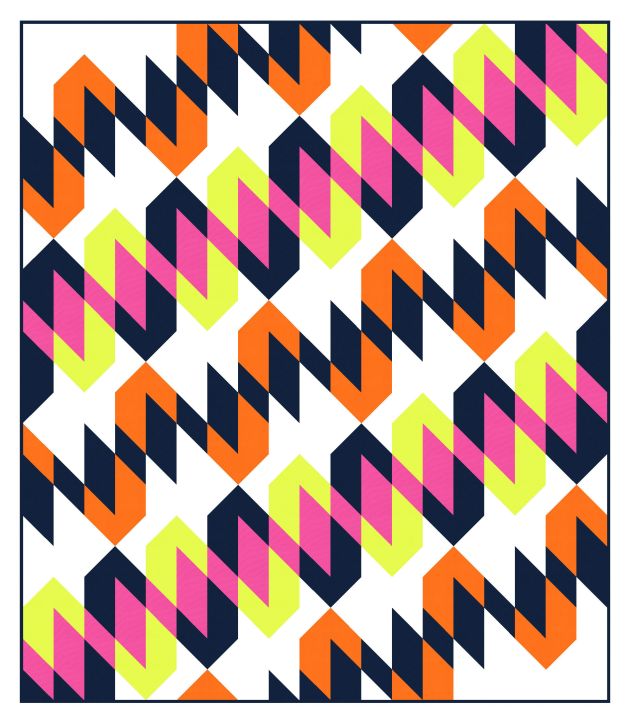 This week’s designs are all made from half-square triangles and squares. I’m not sure there’d be much advantage in trying to assemble a quilt using blocks; I’d be tempted to just make a bunch of HSTs and squares and then lay them out in rows and columns to sew together. It’s the sort of design that might make you feel like you’re not making much progress until the very end.