More skinny strips this week, but straight this time.

Believe it or not, this design is made from a single block in a 4×4 layout. And each block is a 4×4 arrangement of squares that are separated by thin sashing. Depending on how the background and sashing are coloured (or not), different parts come to the foreground or move to the background. Here’s the reverse colourway.

I actually started with black sashing and two colours. I worked through the shapes, colouring as I went, making sure that adjacent shapes never had the same colour. In some places I had to move the sashing or change the shapes to get the desired effect. (Oops, I can see one spot where two white shapes are touching sides.)

The black lines are a bit Mondrian-ish, of course, which is why I changed them up a bit.

This design could be made into a quilt using normal piecing of squares, rectangles and thin strips. And the layout possibilities are endless!

You can probably see how this design evolved from Sunday sketches #259 and #260 – a simple shape with strips sticking out. In this case, the shape is a teardrop-like combo of a half-square triangle and a quarter-circle, and the strips that extend from it create its mirror image. 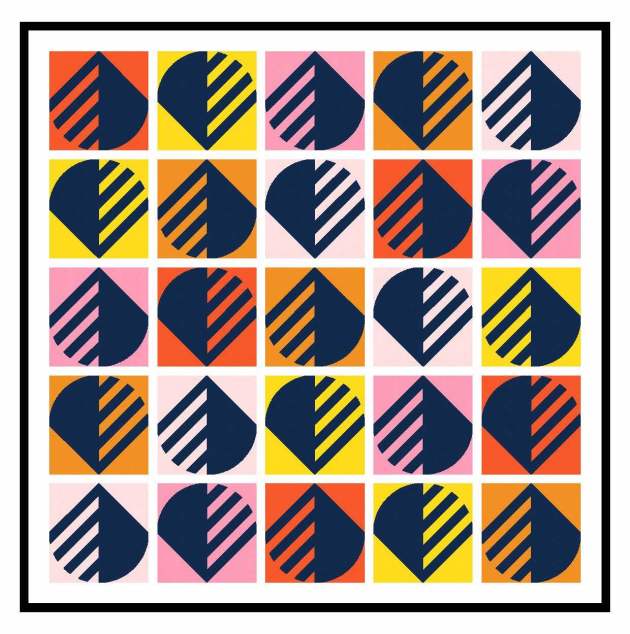 And, like some of the designs from the past 2 weeks, it’s got sashing. I’ve used the same width of sashing as the width of the other strips. It’s a nice way of separating those background colours and keeping the whole design from feeling too crowded. And it’s narrow enough to let those diagonal lines – from one half-square triangle to the adjacent one – extend across the quilt design without interruption.

Often when I create a bunch of quilt designs from one block design, I’ll share them all in a single post. But I split up the latest batch into last week’s Sunday sketch and this week’s. The arrangement is kinda different, and I played with two different colour schemes, so… it felt worthy of a new post.

So, picking up from last week – here’s the same block in a vertical orientation, but with a more limited colour palette. Black and white shapes instead of colour, and a coloured background instead of white. I’ve still used the same arrangement where the stripes are a different colour than the background rectangle in each block. But by alternating the colours and rotating the blocks, the borders between the blocks are less obvious.

This one’s much the same, with the columns shifted one over so that the very left-hand and right-hand edges of the block arrangement are fully straight instead of stepping in and out. I think I prefer the one above. 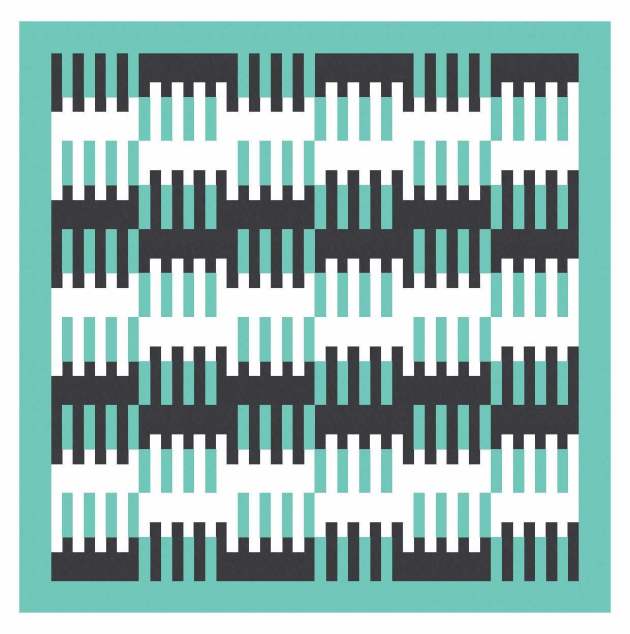 These blocks have lots of possible arrangements, which can be expanded by adding sashing (similar to last week). Here’s the same design with and without sashing.

The addition (and then subtraction) of sashing really changes the feeling of movement within the design.

So, like last week’s design, this one’s all rectangles (some long and skinny, some larger). There are a lot of repeated elements, which means lots of chain-piecing possibilities! I think you could sew lots of long strips together and then subcut them into the pieces needed for each block. There’s also be  places where you’d need to match points fairly carefully (not everyone’s cup of tea).