I don’t normally do improv or random, but this week’s Sunday sketch ended up that way (in appearance, if not in design).

This is actually a block-based design, but with multiple elements of each block coloured in a way that kinda hides the repetition.

It started as a much more recognisable design – a wonky nine-patch. Here it is in a standard layout, with 5 colours per block: the dark blue centre, and then 4 colours each for one of the long sides and small corner pieces. Then rotating the blocks creates some fun movement.

But after starting with the standard layout, I played around with the block placement and colouring. I kinda like how a fairly traditional block can feel more modern just with a few tweaks. I’ve seen some quilty conversations lately around the definition of ‘modern quilting’, and examples like this design make me question what counts as ‘modern’. I’m not sure I know. 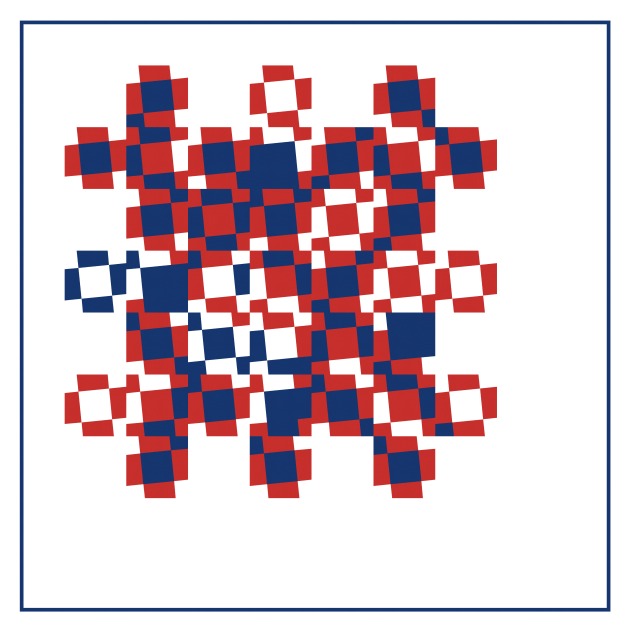 Anyway, I like how far the first version of this design feels from the others. I can see the origin when I look at it, but I’m not sure it’d be completely obvious to others.

if I was going to make it, I’d probably rework it further to try and obscure as many of those vertical and horizontal lines as possible – they make it a bit too obvious where the edges of the blocks are. There are some areas where the colouring of the pieces makes those borders less clear, and I’d aim to achieve that more consistently across the whole design. I’ll keep playing with it.

I’m not sure if I’d piece a normal nine-patch and trim it down to the wonky version, or if I’d just use templates to cut the wonky shapes and then piece them together. The former would probably be more accurate, but the latter might be less wasteful.

This site uses Akismet to reduce spam. Learn how your comment data is processed.