I’m still playing with the same triangle-in-a-square block that made its first appearance in Sunday sketch #243 (and was also the basis of sketches #244 and #245). Here it is again, set on point.

Sometimes it takes many rounds of revision before I hit on a design that I like. I can walk you through how this one came to be, so you can see what I mean.

First, I started with a regular layout of squares and triangle-in-a-square blocks. I used flower shapes (like in #243), but coloured the squares in between the blocks to make it look like the shapes were overlapping. I liked how those background stars appeared, but overall the design felt a bit too crowded for me.

To relieve the crowdedness, I changed the layout (expanding the overall size, and increasing the number of blocks), added some negative space around the perimeter, and emptied out the central square of each shape (using the square-in-a-square block that I introduced in #245). I liked this version more, but it still felt a bit busy to me.

After looking at that design for awhile, I realised it might look interesting set on point (that is, on the diagonal). So I revised the design (all of this was done in Electric Quilt 8). Setting the same layout on point also introduces lots more negative space, which helps to focus your eye on the design but also relieves the busy-ness.

You’ll notice that I also filled in the spaces I’d introduced in the shapes themselves – I decided I didn’t need that square-in-a-square block after all.

So – I liked the diagonal layout more than the standard layout. But I still wasn’t completely satisfied. So I tried a few more variations, where the two sets of shapes (yellow and blue) overlapped in different ways. Here’s one. 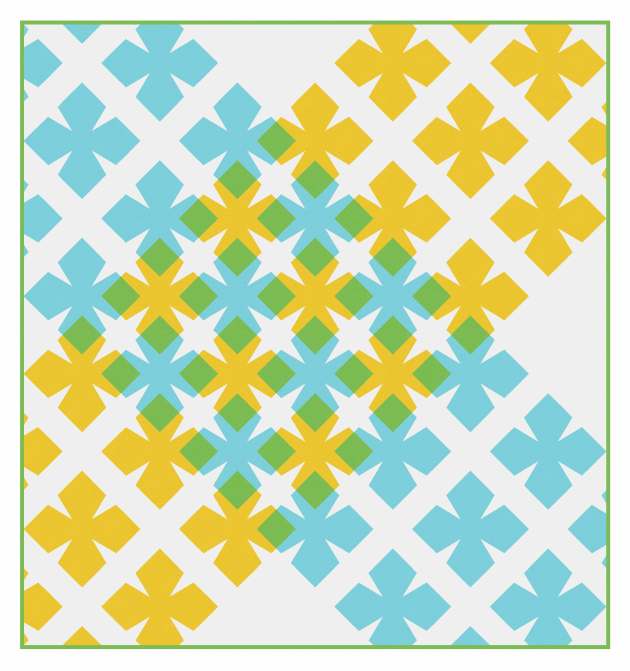 Don’t you love those background stars that emerge in the middle, where the two sets of shapes overlap? I liked this version, but ultimately decided that there was still too much going on.

So I scaled back the movement by making the two sets of shapes run in parallel instead of perpendicular. Ahh, that’s better. 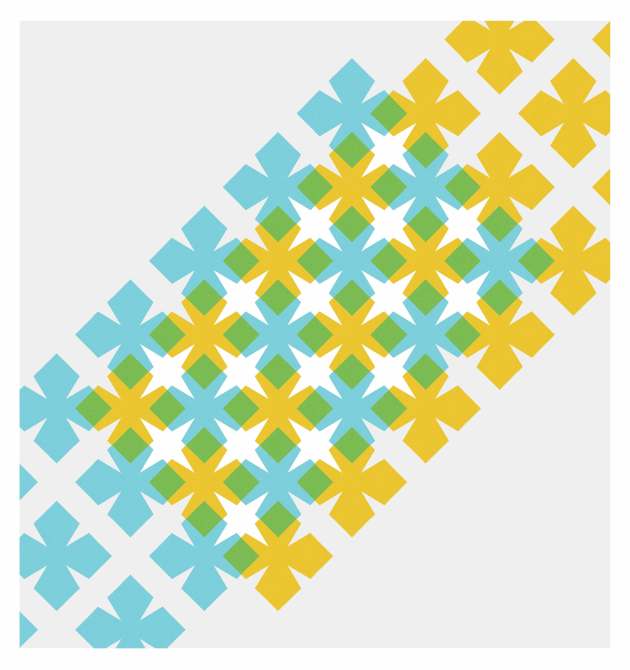 In this version, I also coloured those background stars in white. You might not notice them at first, as the white is only a shade brighter than the light-grey background. But once you get your eye in, they’re easy to find. I can’t decide if I prefer the stars highlighted like this or not… so you get to see both versions!