The Modern Quilt Guild stirred up controversy recently in a blog post on ‘Understanding Copyright, Derivatives and Design Credit in Quilting’. Now retracted thanks to considerable criticism from its members, the post outlined the MQG’s stance on derivative quilt designs. Unfortunately the post conflated what the MQC would tolerate (at QuiltCon) with what’s allowed under US copyright law. And of course, laws are different around the world; what works in the USA may not work elsewhere, and vice versa.

US copyright law is intentionally imprecise, which means that ‘derivation’ and ‘inspiration’ are often in the eye of the beholder (at least until the courts are involved). There’s an inherent subjectivity involved in determining the difference. How can we tell whether someone has been inspired by another design or designer or has created a derivative of the work? Can we develop guidelines (as the MQG has tried) or must each case be decided on its own merits (as in US law)?

Recently I completed a quilt top based on a block design that I created as part of Blossom Heart Quilts’ My DIY Block Design Challenge. Week 2 of the challenge was all about sketching: using the lessons from Alyce’s ebook to design a quilt block. I started playing around with Excel (yes, Excel) and came up with this design, among others. 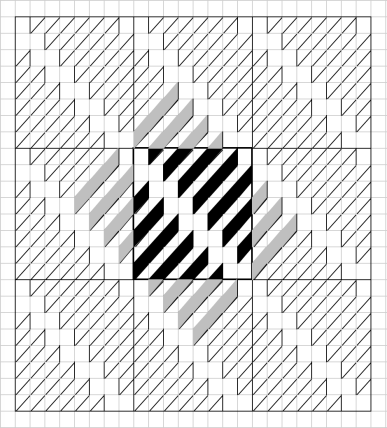 (The same design could be made more easily used striped blocks set on point, but I was in the midst of trying to perfect my half-square triangle technique!)

Week 3 of the challenge was all about making. Using fabric that I’d recently added to my stash, I made a block based on the Excel design (which snagged me a prize, yay): 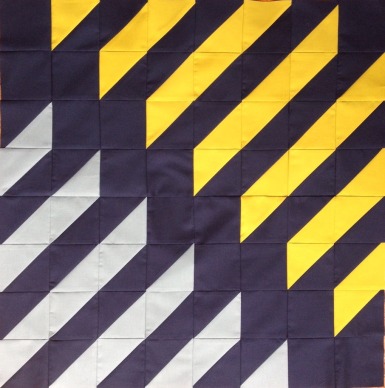 Over time, I made another 3 blocks in coordinating fabrics, with the intention of arranging them into a larger square: 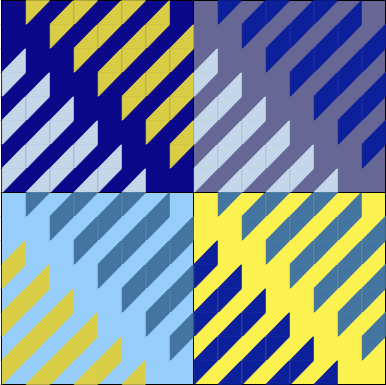 Excel’s fill and background colours don’t have quite the same range as Kona and Moda solids, but you get the idea: each colour would feature three times across the four blocks; each block would have a different background colour; and no colour would extend between adjacent blocks – the continuity across the blocks would come only from the design itself.

I set aside the 4 sewn blocks for a few months while I considered 2 possible arrangements, stressed about wrangling Essex linen alongside Kona solids, and further practiced my HST technique.

In the meantime, in one of my many meanders around Pinterest, I came across a remarkable artwork that immediately caught my eye. (I won’t post a picture for fear of breaching copyright.) An untitled work by German graphic designer Anton Stankowski, it’s a large square separated into quadrants crossed by bold diagonal lines. Unlike my design, the lines extend across vertical pairs of quadrants, and the horizontal quadrant pairs share the same background colour. But like my design, Stankowski uses only 4 colours (his are yellow, light blue, a purplish blue, and black; mine are mustardy yellow, light blue, dark blue and Essex Linen charcoal).

Before stumbling across this image, I had never seen this artwork or heard of Stankowski. But – to my mind, at least – the similarities between the two designs are striking. The fact that I only saw the image long after I’d finished my design reassures me that I didn’t inadvertently derive from Stankowski’s work, but for the same reason, I can’t claim that my design was inspired by it either.

Any similarity between my design and Stankowski’s is pure coincidence: ultimately there are only so many ways you can combine geometric shapes and popular colours. Considering the prevalence of simple shapes and standard block sizes in quilting, it’s no surprise that some of the same designs pop up again and again. Sometimes due to inspiration, sometimes derivation, and sometimes just chance.

I finally pieced together the 4 blocks without difficulty, and I’m really pleased with how it turned out. 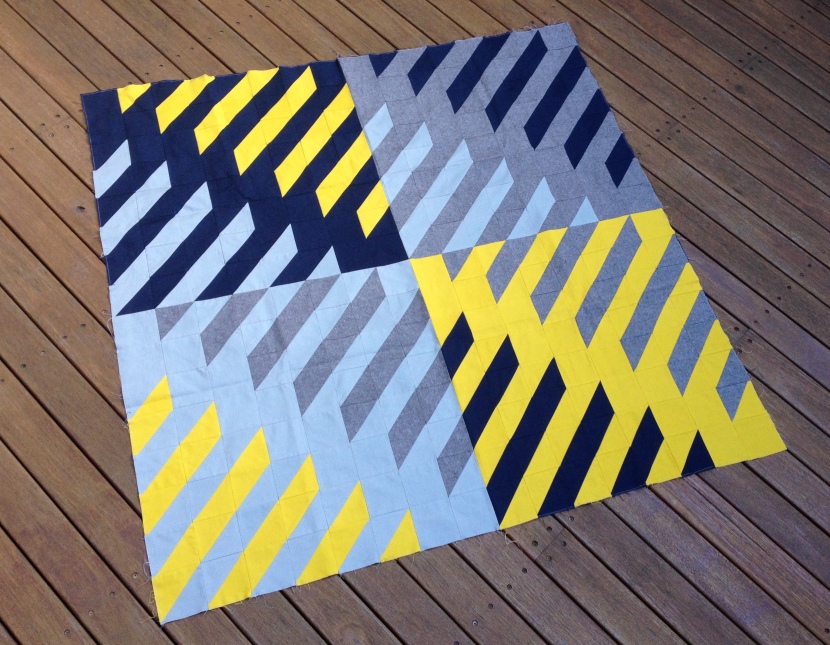